For your Junior Certificate, you need to know what is meant by the term ‘system‘, know of what a system is composed and you need to be able to give examples of a system. There are some special case studies you need to know also. Beyond the Junior Certificate, it is a really useful skill to be able to look at something and break it down into a system. Knowing how to do this can help us solve problems and even find ways to invent new things that enhance our standard of living.

What is a system?

A system is a way of describing something. It’s that simple. Almost everything can be described as a system. 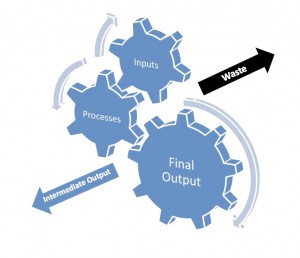 A system is made up of three main parts; Inputs, Processes, and Outputs.

Inputs are thing things needed to produce something.

Processes are the activities done to to the inputs make something new or different.

Outputs are the results of the processing, usually a new product.

Making bread can be described as a system.

Processes – The inputs are added to a container and kneaded. Once kneaded, the ingredients make dough. The dough is left resting while the yeast acts to make the dough rise (otherwise the bread will be flat). Once ready, the dough is placed in an oven and baked. When baked, the bread is removed from the oven. It might be further processed by being cut into slices and wrapped before being sent to a shop.

Output – The output of this system is bread. It is transported to a shop where it can be sold. Bread is a perishable product (goes stale quickly) so it needs to be sold as quickly as possible. Bread is made every day to meet demand. Bread that is not fresh when it arrives at a shop will not be sold.

Processes are easy to identify. All verbs are processes. Words ending in ‘ion‘ or ‘ing‘ or in the past tense ‘ed‘ are process words.

We can add some detail to this description of a system. When the inputs for bread are combined they make dough. This is a new product made by combing the ingredients but it is not the bread. In this case the dough is called an intermediate output. The bread is a finished product or a final output.

When making bread in large quantities, such as in a bakery, some small amount of the ingredients do not end up in the bread. This, and packaging ends up as waste from the system. Waste is something that can not be used anywhere else and has no value. Companies try really heard to limit waste as it can cost a business dearly to dispose of it. Another example of waste is carbon emissions from energy consumption.

Sometimes the yeast doesn’t rise well or loaves of bread might not turn out well enough to be sold. Rather than throw this bread away, a bakery might sell this ‘by-product‘ to a local pig farmer as animal feed. A by-product is a product that has come out of a system but which is not the final product; it is not the reason for the system in the first place.

All systems are linked

In describing the bread making system above, some inputs were deliberately ignored. For example, the oven used to bake the bread is an input. The labour of the baker is also an input, as is the electricity used to power the oven. The truck used to transport the bread to market is also an input.

Why is it useful to know about systems?

If you make bread using the process above, it might not turn out very well. By looking at breading making as a system, we can look at the individual steps involved and see where it can be improved. For example, adding more or different ingredients, kneading the bread more than once after it has rested or changing the cooking time might produce a better final output.

This applies to all systems, not just the example above. Changing the inputs and processes in any system will lead to different final outputs.